Silves is a historic and delightful town, which was originally the ancient capital of the Algarve. Under the Moors (9-12th century), Silves was a major defensive stronghold and important trading centre, with boats sailing down the Arade River and crossing to North Africa.

Today, Silves is peaceful and unhurried, but remnants of this illustrious past can be seen scattered throughout the town. This includes the imposing red brick castle, the impregnatable town walls, and the Gothic cathedral, built on the site of a magnificent mosque. For visitors, Silves is a joy to explore and has a distinctly Portuguese ambience, with open-air cafes, cobbled streets and a relaxed pace of life.

Along with its rich history and fascinating attractions, Silves has a scenic location, set along the banks of the slow-flowing Rio Arade and within the rolling hills of the Algarve countryside.
Silves is a highly recommended destination to visit during your holiday to the Algarve, and this article will provide a 1-day tour, tourist information and travel information. 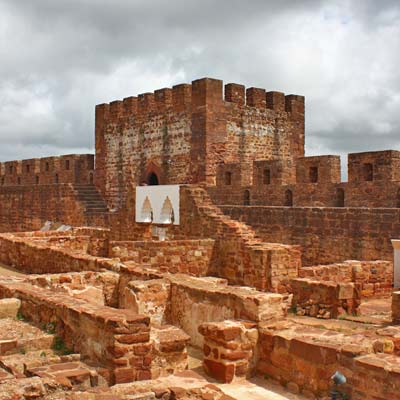 The Castelo de Silves, from which the Moors ruled over the entire Algarve 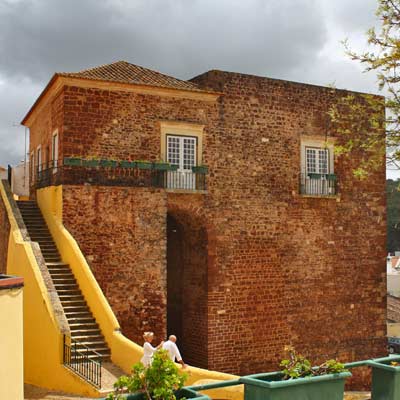 The Portas da Cidade de Silves, the narrow gateway and best-preserved section of the town walls 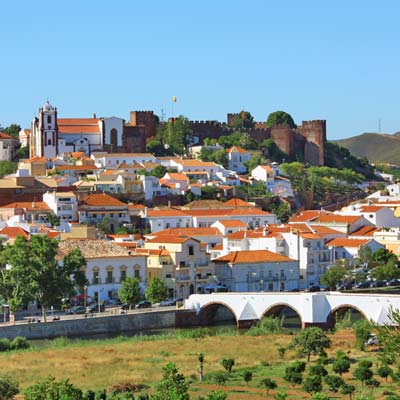 The view over Silves from the main road into town 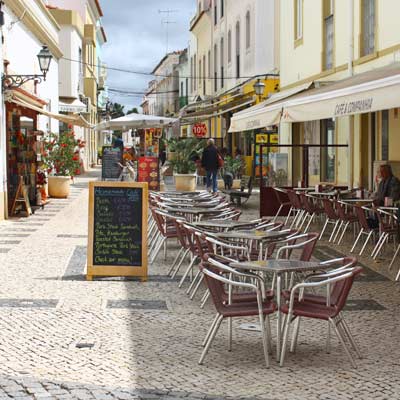 Silves may only be a relatively small town, but it has a lot to entice tourists to visit, especially for a day trip. No other place in the Algarve can rival Silves’ long and varied history, while the castle is a truly unique attraction of southern Portugal.

Silves is far removed from the hecticness of coastal resort towns, and is a great setting to experience typical Portuguese daily life, either in the daily market, or bustling cafes and restaurants. 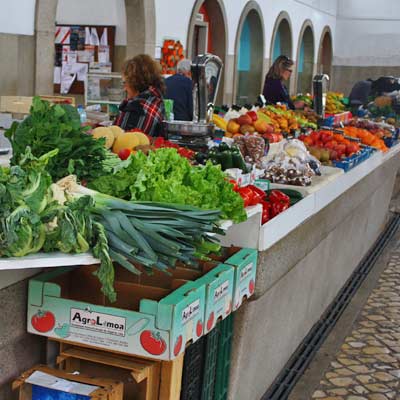 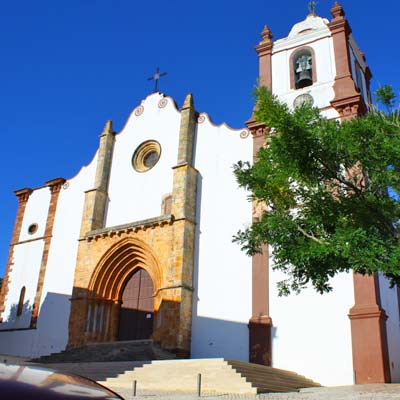 Much of the Se cathedral was destroyed after the 1755 earthquake, but the main portal is original gothic structure

Silves as a day trip

Silves is one of the best destinations in the Algarve for a day trip. There are sufficient and varied sights to fill a day’s sightseeing, and there is good public transport from the major tourist centres of Lagos, Portimão and Albufeira.

The historic centre of Silves is compact and can be easily explored on foot, but be warned, there are steep cobbled streets leading from the river up to the castle. Silves can be raced through in a couple of hours, but a typical day trip lasts four hours. This includes time for lunch and provides a more leisurely pace of sightseeing, essential when exploring under the intense summer sun.

If you have a rental car, the day trip could be extended by driving through the hills of Serra de Monchique and visiting the town of Monchique. There is a large car park to the south west of the town.
Our opinion: Other destinations which are highly recommended for day trips include Faro, Loule and Olhão.
Related articles: Faro introduction- Loule introduction – Top 10 Algarve

Our 1-day tour of Silves

The following section is our suggested day trip to Silves, which includes all of the main attractions of the town.
The map below displays the 1-day tour.

First get a map of Silves from the Tourist Information (1) and wander along the banks of the Arade River to the Ponte Romana bridge (2). Head to the main shopping street of Rua Elias Garcia (3), which is lined with open-air cafes and independent shops. Next is the Praça do Município (4) a delightful plaza, which is surrounded by the Câmara Municipal (town hall), the pink tiled Casa Rosa, and the Portas da Cidade de Silves (5).

This narrow gateway passes through the solid city walls to the Museu Municipal de Arqueologia (6) (€1.50). From the museum and gateway, it is a steep climb along the Rua da Sé up to the castle. Along the Rua da Sé, is the ancient Sé Catedral de Silves (7) and the Igreja da Misericórdia de Silves (8).

The Castelo de Silves (9) (€2.80) will be the highlight of a day trip to Silves, and the ruins take around 40 minutes to explore. For lunch, we recommend the highly rated Café Inglês (10).

This following section could be included to extend a day trip. Visit the Mercado Municipal (11), which situated close to the river, to experience typical Portuguese daily life. For the perfect photo of Silves head to the viewpoint (12), which is on the busy N124 road. The Cruz de Portugal (13), is a 15th-century cross and is to the north of Silves. 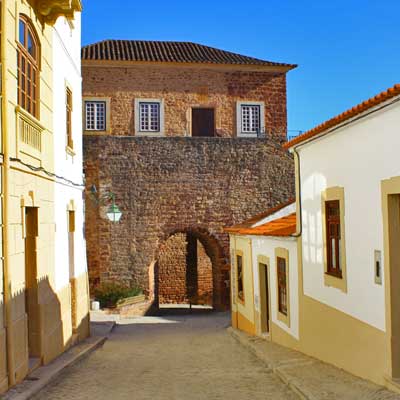 Silves is a very pretty town 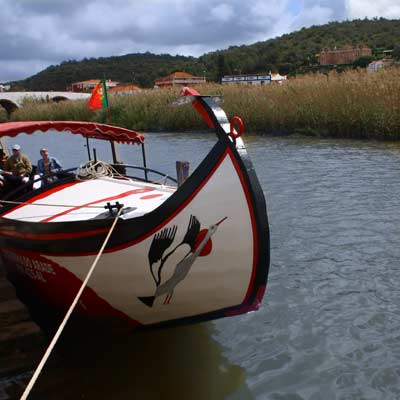 Nowadays only tourist vessels ply along the Arade River 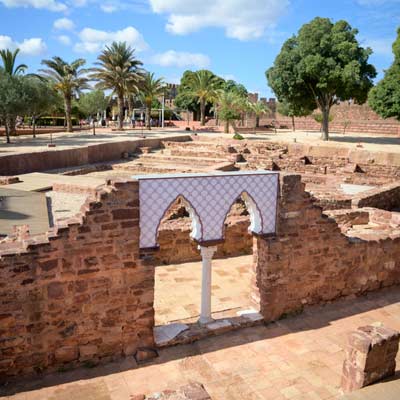 The ruins inside of Silves castle, with the restored section to give an indication of how it once looked 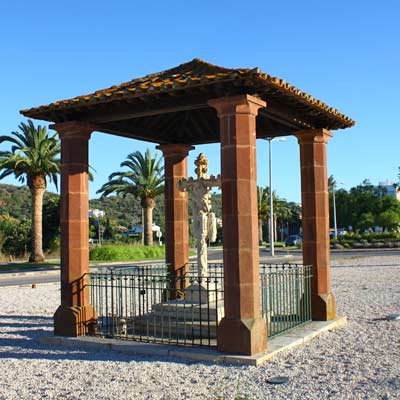 The gothic Cruz de Portugal is historically significant, but is only a minor tourist attraction

A small group tour of Silves?

Small group tours are a great way to explore the Algarve and are a chance to meet fellow travellers. These tours remove the hassle of public transport, provide knowledgeable guides and pack a lot of sightseeing into a single day. We have worked with GetYourGuide.com for the previous six years and some of their best tours of Silves include:

A holiday to Silves

The majority of visitors to Silves are day-trippers, and very few even consider a night’s stay within the town. This is a shame, as the town offers a peaceful setting, numerous restaurants and a true Portuguese experience, which is difficult to find in the Algarve.

If you are touring the Algarve, do consider Silves in place of the hectic resort towns along the coastline. One consideration for a holiday to Silves, is the distance to the coastline and beaches, which are over 15km to the south, and means a rental car is essential.
For a guide to the best hotels in Silves, please see Booking.com.

The history of Silves

Silves was founded by the Romans but it flourished under the North African Moors. The zenith of this era was in 1054, when Al-Mu’tamid commanded over the entire Algarve and parts of southern Spain.

During the Christian Crusades of the 11/12th centuries, Moorish Silves was subjected to continued fighting, as the newly established Catholic Portugal tried to drive the Moors from the Algarve. The castle was the focus of numerous battles, being sacked by King Leon in 1160, sieged by King Sancho I in 1189 and then recaptured by a powerful army lead by Amir al-Mu'minin in 1191.

The Moors eventually relinquished Silves in 1243, but this ultimately led to the demise of the town, with the severing of the trade routes to Northern Africa. In 1755 the town was badly damaged by a massive earthquake, and the course of the river was altered, preventing it being a navigable port. 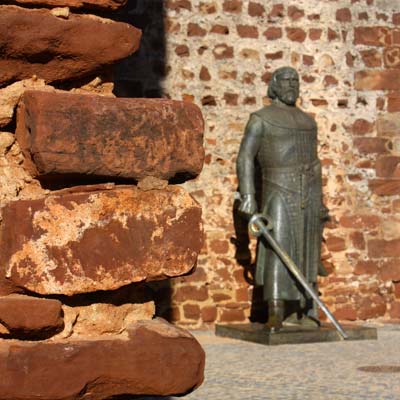 The statue of King Sancho I, who laid Silves to a 3-month siege in 1189 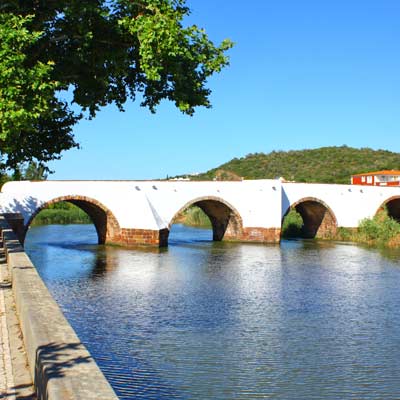 If you are reliant on public transport, the bus is the recommended means of travel to Silves from Portimão, Praia da Rocha, Lagoa and Albufeira, while the train is the suggested option from Lagos or Faro. There is a direct bus service from Albufeira to Silves (45min, €4.10), which departs from Albufeira bus station. The Portimão bus takes a tedious 1h10min as it passes through the town of Lagoa. For the latest bus timetables, please see the Eva bus website:
http://eva-bus.com/index.php?lang=uk
The Algarve regional railway follows a bizarre route that does not connect close to any of the major towns, the only towns it actually stops in are Faro and Lagos – the two termini of the railway. For the latest train timetable, please visit the CP (Comboios de Portugal) website:
https://www.cp.pt/StaticFiles/timetables/vila-real-s.antonio-lagos-regional-trains.pdf
Silves train station (GPS: 37.175582, -8.440430) is located 1.5km south of the town, and the walk to the historic centre is not great, as it follows a major road with limited footpaths and steep hills. 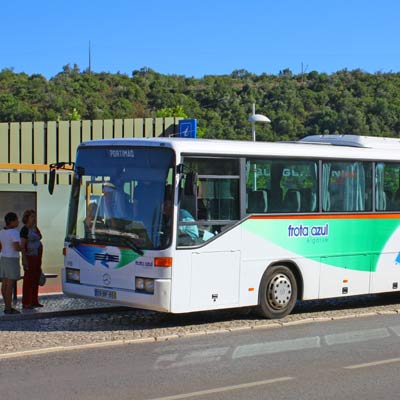 The bus to Portimão waiting outside Silves’ tourist information office 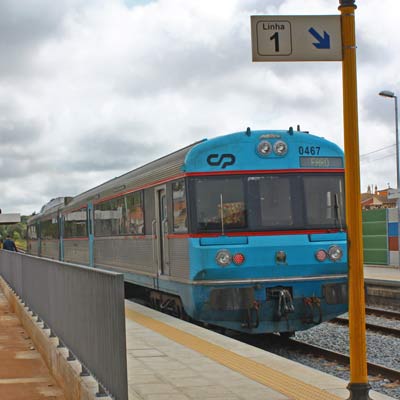 The Algarve regional railway is slow…..

The finest tourist attraction of Silves is the imposing castle that dominates the skyline. The castle dates from the 7th century but the red sandstone brick battlements seen today originate from the 12th century, at the height of the fighting between the Christian Crusaders and the African Moors.

This constant fighting led to the construction of the castle’s massive fortifications and ingenious methods to survive an extended siege. These features included a rain-fed cistern, which were so effective they were used up until the 1920s. 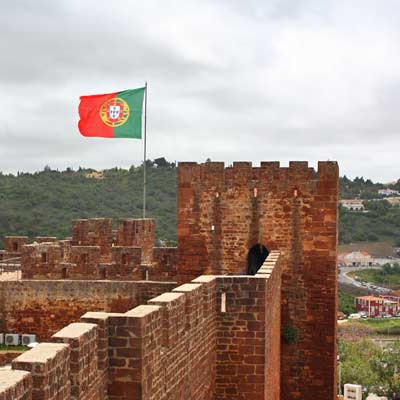 Within the castle there has been extensive archaeological excavations, and from the battlements, there are wonderful views over the town. At the entrance to the castle is a statue of King Sancho I, who led the first significant victory by the Portuguese in the Algarve by storming the castle in 1189.

Curiosity: You may wonder how the castle has remained in such a great state of preservation for so long, but this is due to a major “restoration” project which was undertaken during the 1940s.

Silves and Loulé are both popular day trips for visitors who are based along the Algarve coastline. Both are historic towns and provide a chance to experience typical Portuguese daily life, but they are very different, and will appeal to varying groups of tourists.

Loulé is much larger, being a bustling city, with a lively daily market and more shops. Silves has more character and charm, with an extensive history and impressive tourist attractions. In our opinion, Silves is the better destination for a day trip.

The best guide to Silves