Sagres is at the extreme western tip of the Algarve and is like no other destination in southern Portugal. It is a region for the adventurous, the intrepid and those who seek to pit themselves against the wild environments. These dramatic landscapes are dominated by nature’s raw power; from the raging seas that carve immense cliffs, the bracing winds that create barren landscapes, through to the intense summer sun, which burns careless tourists.

Sagres is primarily a surfing destination, but there are sheltered pristine beaches for relaxing on, and an unassuming cool vibe about the town. Day-trippers are drawn to Sagres by the Cabo de Sao Vicente, a remote and bleak headland, aptly fitting for the most south-westerly point of mainland Europe.

Sagres is a location where visitors come to challenge nature; be that surfing in the turbulent seas, hiking along cliffside trails, cycling deserted roads, or simply basking under the glorious sun. The town may not be for all, having a laid-back ambience and an outpost’s rugged and unkempt appearance, but for others, Sagres will be the finest location in the entire Algarve. This article will provide an introduction Sagres, a truly unique town of the Algarve. 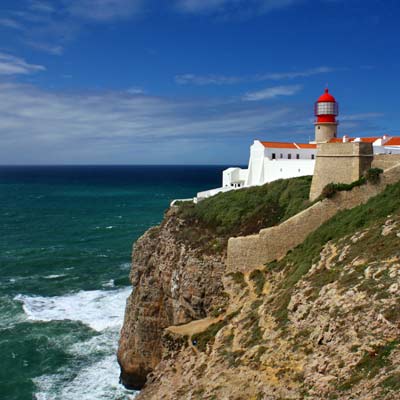 The huge cliffs of the Cabo de Sao Vicente 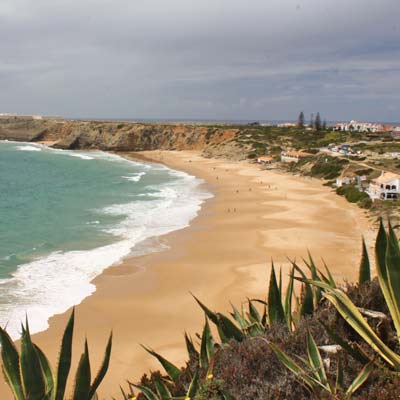 .....and the beautiful beaches of Sagres

During your trip to Sagres, you will discover beautiful beaches, a distinctive fort and some of the most challenging surfing found in Portugal. The town has a low-key and personable atmosphere, where many of the visitors have been drawn for the same passions; the outdoors and the love of the sea.

Surfing is often the main reason why visitors head to Sagres. The town has been blessed with multiple beaches facing differing directions, which ensures that there is always at least one beach suitable for surfing, no matter your ability. Within Sagres surf equipment can be hired, and there are also surf schools to hone your skills

Surfing is the main activity of Sagres, but there are also challenging hiking trails, quiet roads for cycling, while departing from the harbour are deep sea fishing trips. For those tourists with a rental car, Sagres can be used as a base to explore the southwestern side of the Parque Natural do Sudoeste Alentejano e Costa Vicentina, a region of remote beaches and stunning wild beauty. 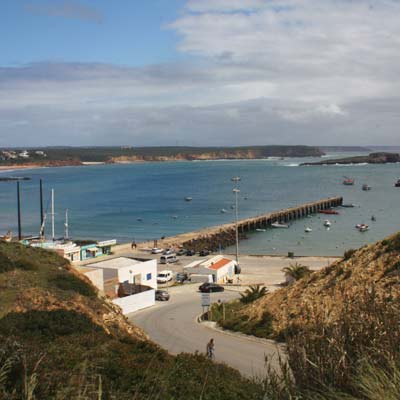 The sheltered fishing harbour of Sagres 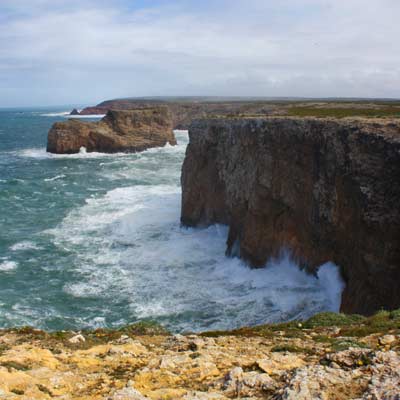 What about a holiday to Sagres Portugal?

A holiday to Sagres will appeal to two main groups of tourists; surfers (kite, surf or body boarding) and visitors who enjoy the outdoors and wish to escape the crowds and mayhem of the central Algarve. Part of the allure of Sagres is the remote setting, but this may (and should) deter tourists wanting a conventional holiday as, apart from the beach and surfing, there is not actually much to do in Sagres.

Sagres is popular with visitors who are touring southern Portugal, and the town does offer a range of modern hotels and family run restaurants. Sagres, along with the whole of southern Portugal, is extremely popular in the summer, so if you are seriously consider the region for your holidays, we strongly suggest you to book your accommodation now, as it will sell out during the peak months.
The map below shows the location of hotels and rental rooms in Sagres, and by altering the date to your holiday, the map will display current prices.

How about a day trip to Sagres?

Sagres makes for an enjoyable day trip for those visitors based in Lagos, Luz, Burgau or the surrounding region. A typical day trip to Sagres visits the Cabo de Sao Vicente, the Fortaleza de Sagres, the fishing harbour and the Praia da Mareta, along with lunch in the town centre. Sagres can easily be visited as an independent day trip from Lagos as there are regular and inexpensive bus services.

If you have a rental car the day trip can include driving along through the deserted Parque Natural do Costa Vicentina up to the Praia Da Bordeira.
Related article: Day trip to Sagres from Lagos. 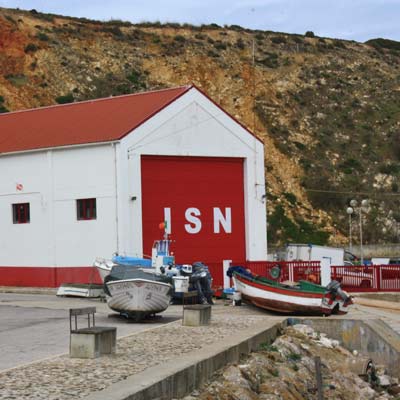 Sagres is a ramshackle town and fishing community 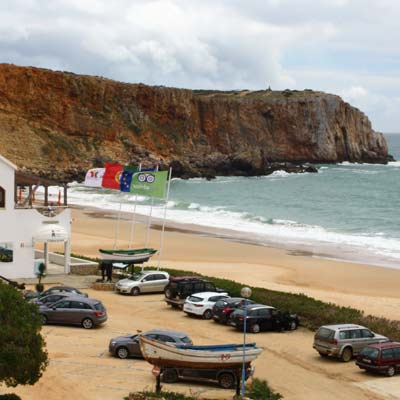 There is always something going on at the Praia da Mareta

Sagres has some of the best surfing waves in Portugal, with massive and powerful swells that roll in unimpeded from the Atlantic Ocean. As Sagres is on a southern extending headland, the beaches of the town face three different directions and some are more sheltered from the waves than others. For surfing, this means that the beaches are suitable from beginners through to highly experienced surfers.

Sagres has many excellent surf schools (with lessons in a range of languages) and is an inexpensive place to learn to surf. Surf equipment can be hired in Sagres and this avoids the hassle of transporting items. After spending the day in waters, the bars are filled with likeminded people and there is a distinct surfer’s vibe in Sagres, especially outside of the tourist season.

The Praia do Tonel faces a westerly direction and is pounded by some of the largest waves of the region, while the Praia da Baleeira is next to the fishing harbour and is the most sheltered of the three. The Praia do Martinhal is only a short walk from central Sagres and is another large beach. Northwest of Sagres is the Praia do Beliche one of the most popular surfing beaches in the region.
Related article: Sagres beaches 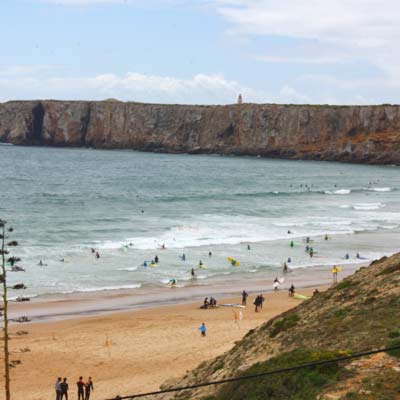 The Praia da Mareta is popular year-round with surfers 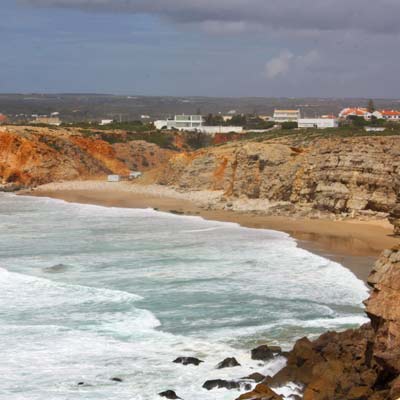 The Praia do Tonel’s waves sometimes can be too strong

When to Visit Sagres?

The peak of the summer season is from June until the end of September, while the best surfing is in late autumn and early winter. Sagres is fortunate that there is decent surfing almost all year round.

For a touring holiday, the spring months are the best season to visit Sagres, when the weather is warm and bright but without the intense summer sun. Winters are mild but unpredictable and Sagres will feel very quiet during this time, except for the few experienced surfers.

The average weather of Sagres

There is only one main tourist attraction in Sagres, the Fortaleza de Sagres. This fort is unique because it has only one defensive wall spanning the southern edge, as the other three are guarded by the immense and sheer cliffs of the headland.

Inside the fort there is a pleasant 1.5km cliffside walk, a lighthouse, a grotto and a large wind compass. Some visitors may be slightly disappointed by the sparseness of the fort but as with everything in Sagres the main attraction is the setting and scenery. The entrance fee is €4 and a typical visit lasts 40 minutes. 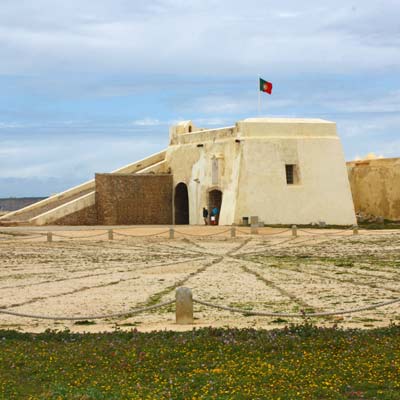 The wind compass inside the fort 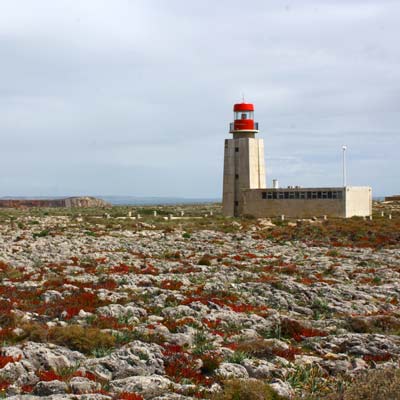 The lighthouse inside the sparse Fortaleza de Sagres

The Cabo de Sao Vicente is one of the finest natural features of the Algarve, it is not picturesque or scenic, but immense and dramatic perfectly reflecting the natural westerly point of Europe. The ferocious waves of the Atlantic Ocean pound the massive cliffs, while high above the immensely bright lighthouse guards the treacherous cliffs.

Up until the 13th century the Cabo de Sao Vicente headland was believed to be the end of the known world, and no visit to Sagres is complete without visiting this bleak and wind-torn headland.

The constant winds prevent any substantial plant growth, while the whole barren appearance is in keeping with the once belief that it was the end of the world. There are two bus services Monday to Friday from Sagres to Cabo de São Vicente. The bus is convenient as it waits approximately 30 minutes at Cabo São Vicente before departing, which is usually enough time to see the entire area. 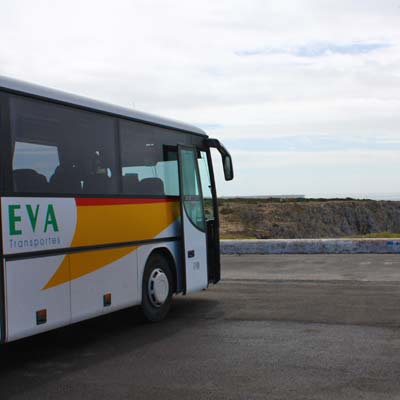 There are numerous hiking trails around the town, which is also the starting location for two long distance routes: the Rota Vicentina and the Via Algarviana. The Rota Vicentina heads north along the Alentejo coastline, while the Via Algarviana crosses the interior of the Algarve; more information on both routes can be found here:
http://en.rotavicentina.com/
http://www.viaalgarviana.org/

For a challenging one-day hiking route there is circular hike from the Praia do Beliche to Cabo de São Vicente, past Telheiro beach and through the hamlet of Santo António and back to Beliche beach. This route is approximately 6km, further information can be found here:
http://en.rotavicentina.com/route-telheiro-beach-circuit-80.html

Do I need a rental car?

There is almost no public transport in the Sagres region, there is a regular bus service to Lagos but not much else. The nearest train station is in Lagos and this is also the location for the main regional bus station. To get the most from a holiday to Sagres a rental car is needed. A pre-booked taxi transfer from Faro airport to Sagres will cost almost the same as three days car hire, so collect the car from the airport before visiting Sagres.

What else can be done in the Sagres Portugal region?

Sagres makes for a good base from which to explore the southern edge of the Parque Natural Costa Vicentina. This protected coastal landscape incorporates Sagres and extends for 100km along the western coast of the Alentejo up to the major port of Sines and contains some of Portugal’s finest and remotest beaches.

Algarve-Tourist.com, with over 200 pages, if it's not here, it's probably not in the Algarve

The best guide to Sagres