Praia da Luz is a pleasant and unhurried resort town, which is ideal for families or couples who are after a relaxing and calm holiday destination. Praia da Luz has a wonderful beach, a welcoming atmosphere and is far removed from the chaos and bedlam of the central Algarve.

The main airport of the Algarve is Faro airport and is 90km to the east of Praia da Luz, and this distance combined with the very limited public transport means it is advisable to pre-plan the onward transfer before arriving in Portugal. This guide will detail how to travel from Faro airport to Praia da Luz, and will provide information regarding private transfers and the use of public transport.

There is no public transport hub at Faro airport and all onward train or bus travel is from Faro city. There is no direct bus (or train) between Faro (city) and Praia da Luz and a connection is required at the historic city of Lagos. 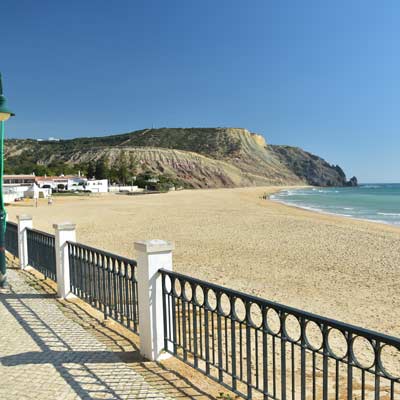 Praia da Luz is worth the effort!

Public transport throughout the Algarve is inexpensive and of a high standard, but departures tend to be infrequent and journeys are slow…. The transfer from Faro airport to Praia da Luz by public transport can take anywhere between 4 – 6 hours. Due to the limited number of departures and poor connections always check the latest timetables, which are listed in the later sections of this article. The main advantage of taking public transport for this long journey is that it is very cheap; a single using purely bus/train will cost around €10 per person.

Traveling from Faro airport to Praia da Luz is a significant cost in either money (private transfer) or time (pubic transport). This inconvenience should never discourage visitors from visiting Praia da Luz, as it is such a wonderful holiday destination, but the cost or time should be factored into any holiday plans.

Should I just get a taxi from the airport?

No, a taxi hired directly from the airport arrivals lounge to Praia da Luz will be incredibly expensive (>€120). A much better option is to pre-booked a private transfer which costs €70/€140 (one way/return). Cheaper options are the transfer buses with tickets around €20- €40 (per person) but these buses stop many times and journeys are surprisingly long (around 2 hours). Summer time in the Algarve are manic and Faro airport can be chaotic, with massive queues for everything, it is always best to pre-book transfers.

Private Transfer from the airport

A private transfer is the easiest and fastest method of travel from Faro airport to Praia da Luz. The most reliable and highest regarded (by people who live and work in the Algarve) transfer company is Yellow Fish Transfers. They operate smart, clean and safe cars and their drivers are renowned for being punctual. 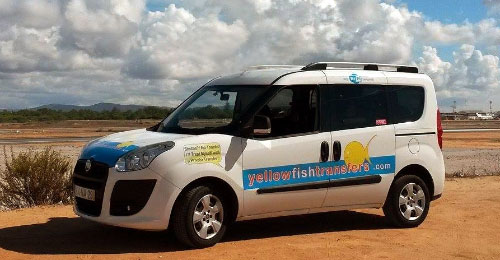 How we use public transport to get to Praia da Luz

When we travel to Praia da Luz from Faro Airport we always take public transport (due to the cost) but always plan well ahead. The key advice is that we always catch the earliest flight to the Algarve, this allows us the maximum time for the onward transfer. Also the first flight of the day tends to have the least and shortest delays, especially if flying with the low cost airlines.

For the first stage between the airport and Faro city we take a taxi, as the bus is so infrequent. From Faro to Lagos we catch the train, which always has ample free seats and is relaxing. At Lagos we cross the river and walk to the bus station for the Praia da Luz bus. In Luz the bus stops close to the church and is only a short walk to the main tourist centre. The following section explains each of these sections in detail and provides links to timetables.

The first stage of the journey is the 6km from Faro Airport to Faro train or bus station. There is a direct bus service from the airport with irregular departure times but at least one bus per hour between 6am-11pm. The journey takes under twenty minutes, the fare is €2.35 and tickets are purchased from the driver. There are departures every 30-50 minutes, and the latest timetable can be seen on the Proximo website at:
https://www.proximo.pt/uploads/schedules/Linha_16_14.pdf
https://www.proximo.pt/uploads/schedules/Linha_14_3.pdf

Stage 2 Faro to Lagos by train

Faro is connected to Lagos by the Algarve regional railway and Lagos is the final station along the line. The journey takes 1 hour 50 minutes and a single ticket costs €7.30. Tickets must be purchased from the ticket office before boarding the train.

These tickets cannot be pre-booked as this is a regional train, but there is always plenty of space on the train. The train departures are infrequent, with no services during the afternoon and the last daily train is at 20:50. The latest train timetable can be viewed on the CP (Comboios de Portugal) website:
https://www.cp.pt/StaticFiles/timetables/vila-real-s.antonio-lagos-regional-trains.pdf

Faro train station is the largest of the Algarve but could still considered as a very small train station, which is very easy to navigate around. Lagos train station is on the eastern side of the marina and only a short walk away from the city centre and the main bus station of Lagos.

Faro to Lagos by Bus

Faro is connected to Lagos by bus services but the departures are just as irregular and infrequent as the train. The express bus, operated by Eva buses, takes 2h10min and the latest timetable can be viewed on their website:
http://eva-bus.com/pdf/57.pdf

The express bus to Lagos departs from the older covered bus station, which is next to the Proximo bus station. Tickets must be purchased (€5.50) from the ticket office (not the driver) and there can be long queues especially during summer. It is better to catch the train than the bus as the journey is quicker and the train is more relaxing.

The final stage of this mammoth transfer is the journey from Lagos to Praia da Luz by the small Onda (Lagos urban buses). The Lagos to Luz bus route is number 4 and takes around 30 minutes. As this is an urban route the fare is only €1.60 but there is limited space for luggage.

The number 4 bus departs from Lagos bus station and terminates in the small town of Burgau, therefore the display in the bus window maybe signed as Burgau. The bus departures are irregular but do continue into the evening, the timetable can be seen on the Onda website at:
http://aonda.pt/downloads/rotas/33.pdf
(link opens new window)

On the timetable the main bus stop for Luz is labelled as Igreja Sra da Luz. Once at Luz congratulate yourself on saving €60 and treat yourself to a well-earned glass of wine or beer! 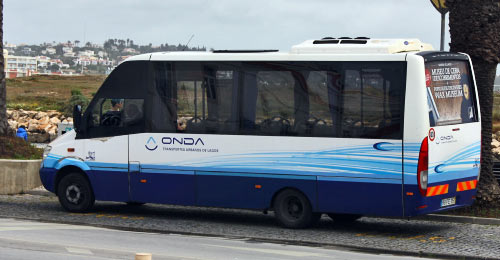 The Onda bus of Laogs

The best guide to Luz